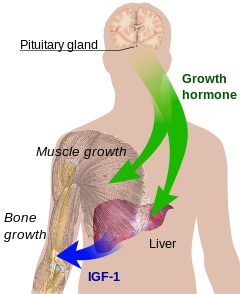 Human Growth Hormone, or HGH, is secreted by the pituitary gland in the brain, and is one of the most-talked about and sought after hormones for people interested in healthy aging. Optimal HGH levels are associated with decreased body fat, increased lean muscle mass, increased collagen production and skin thickness, improved wound-healing, improved energy, improved sleep, and more. It’s a key hormone for youthfulness.

In my opinion, when used correctly, HGH is a very versatile medication. But it’s not available to most people because of its high cost. A host of complicated patent laws surrounding HGH put it out of reach for most people.

For someone who can’t afford HGH, there are other options. Rather than administering HGH directly to a patient, an Age Management doctor can prescribe or suggest alternatives that stimulate the pituitary gland to produce and release HGH.

The alternatives I use include Sermorelin (also known as Growth Hormone Releasing Hormone or GHRH) and Growth Hormone Releasing Peptides (GHRP). That’s because they work to increase HGH secretion by the pituitary gland, but in different ways, using different receptors. These alternatives are available at about half the cost of HGH.  Most physicians prescribe these releasing peptides as injections, but they can also be prescribed  in the form of a sublingual tablet.

There are other things that can increase your levels: Clonidine, DHEA, Deer Antler, Amino Acids, Arginine, Glycine, Glutamine, and adequate sleep.

To schedule an Age Management/Hormonal evaluation, call (281) 367-4700 or e-mail us directly at vitadoc2@gmail.com.